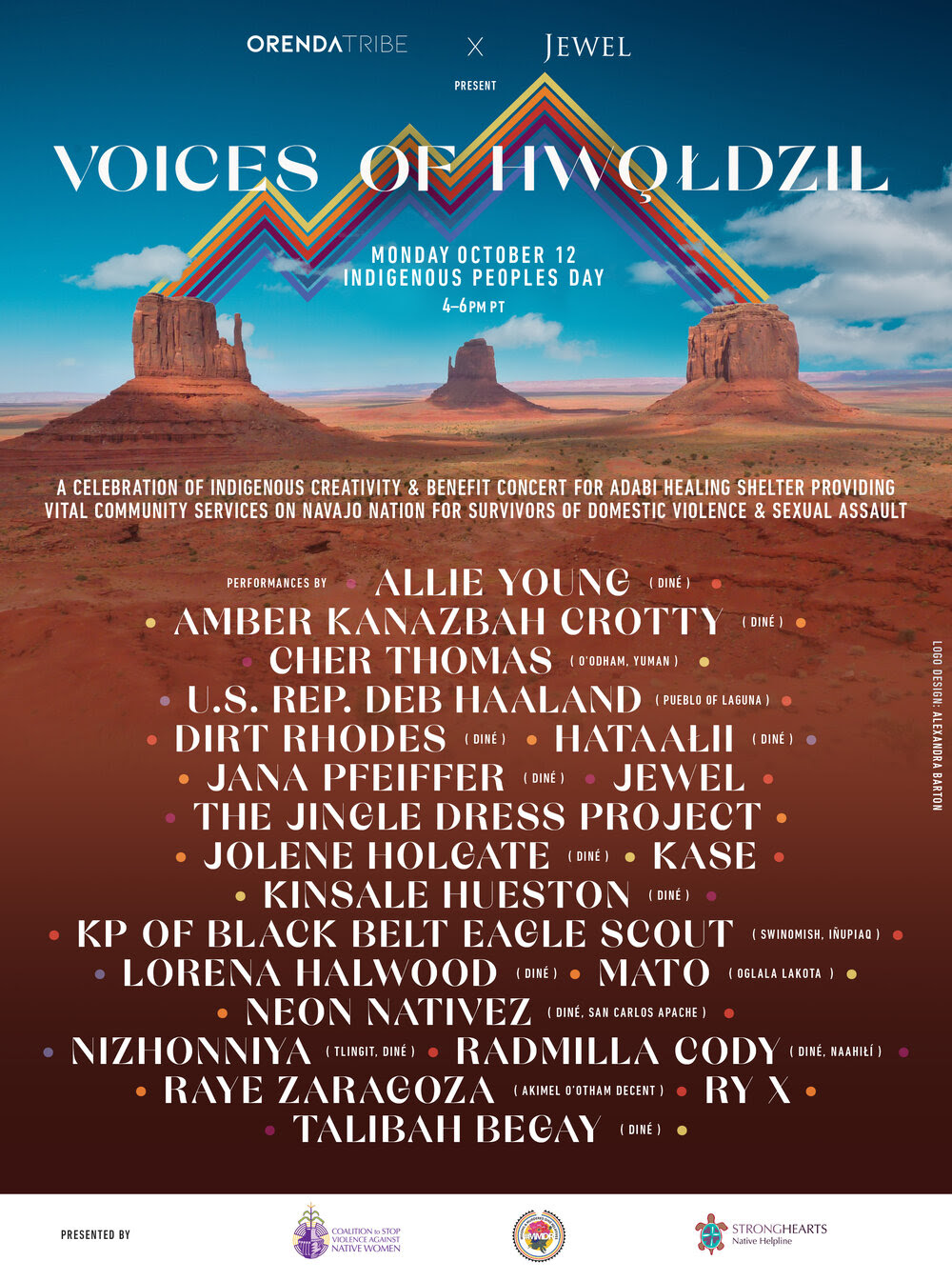 Voices of Hwǫłdzil (Resilience) is a live-streamed concert benefiting domestic violence and sexual assault shelters on the Navajo Nation. COVID-19 has greatly affected Dinétah (Diné Homelands), and continues to threaten their communities. Currently, The Navajo Nation has the fourth highest rate of COVID-19 cases among tribal nations.

This concert will support Orenda Tribe on their mission to bring love and healing to the domestic violence shelters serving Dinétah. The Amá Dóó Álchíní Bíghan (ADABI) shelter has not received funding from the Navajo Nation since August of 2019 and demonstrates the struggles that all of the domestic violence shelters on Navajo Nation face each day. In the beginning of the pandemic, the shelter staff were transporting COVID-19 positive patients with no protective gear. The women who work for these shelters care deeply for the relatives they are keeping safe. In March, many of these workers were without pay and had no idea when they would get their next paycheck. At one point, the ADABI shelter had less than $100 in their bank account. Without donations, the shelter would have had to close their doors to relatives in need. Orenda Tribe has been organizing to help provide the shelters with food, PPE and other supplies. We are dedicated to supporting these women and the beautiful work that they do.

“Our hearts are hurting for these shelters and the amazing individuals who work for them.”

The Tohdenasshai Shelter Home in Kayenta, Arizona was established in 1982 by a grassroots committee and is a community based shelter that has evolved to provide assistance to all genders of people who are victims of domestic violence, sexual assault and elder abuse. The shelter is a safe space for victims/survivors and offers 24/7 year round emergency services. The Tohdenasshai Shelter Home has been serving victims/survivors of violence all across the Four Corners region for almost 39 years. Due to the tribal government shutdown, there has been a significant cut to the funding that provided about 55% of their yearly operating budget.

All the domestic violence shelter organizations funded through the Navajo Nation had expectations that expenses accrued from October 1, 2019 were going to be retroactively reimbursed once the tribal government had the funds situated in their accounting department. However, all shelters have received a letter informing them that the award letter from August 2019 is now deemed “null and void.” New award letters informed the shelters that the 2020 fiscal year contract period will be from June 1, 2020 to September 30, 2020. Unfortunately, shelters are not able to expand the awarded amounts due to “fee for services” changes and flat rate for Bed Night Counts. The shelters are expecting significant shortfalls in their funding due to these changes made to their contracts.